great video.
That "Looks Can Be Deceiving! bog is absolutly awesome.
This is what I would call a perfect bog

Thank you Boggy for sharing that.
Top

Thanks for your appreciation!

Would be awesome to see you do a sink in which you venture into the muck with the intent of pleasuring yourself while in the muck... only to realize that you sank too deep and are too exhausted after climax to get out, and the muck takes you under in the end.

While that is an interesting scenario, I am trying to leave out any sexual aspect to my videos, because I feel it is way too risky. I have been flagged in the past and given strikes, even for videos of me emerging from the mud!

So, I don't want to take any chances.

Also, if I did such a video, it might not appeal to as wide an audience as my other videos, and it might discourage some from viewing my other videos for fear that they might contain more sexual stuff.

On Tuesday, September 5'th, I had my 6'th and final outing of the season! The bulk of the day was spent adding mud to my main bog to raise its level enough to be exposed earlier in future seasons. I wasn't really going to do any videos, but at the end of the day, when I was finished, before cleaning up, I planned on slogging through the "treacherous" bottomless mud on the south shoreline, and felt that I just had to capture it on video, so I would have at least some action to share with the community from that day!

Because it was so late in the day, and the cleanup water was getting a bit shallow from all the dry weather, and the cleanup water not as warm due to persistent clouds and smoke reducing the strength of the sunshine, I had to limit the depth of my sink for a faster and easier cleanup. The top 4 feet of mud was loose enough for me to move my legs and body through (with a lot of work), with thicker stuff below that gives way if I struggle in any one spot!

Because I was basically (forcefully) walking forward through the more jellylike stuff, on top of the thicker stuff 4 feet below the surface, I remained around just over waist deep most of the time, although I did go deeper in some spots. I also wore my glasses because I wasn't submerging. It was really a shame not to go under that wonderful stuff! All I would have had to do was stand in any one place and struggle to sink deeper! If I had been there earlier, and had my swim cap on to keep my hair, forehead and ears clean and dry, and my swim goggles on to keep my eyes clean and dry, then perhaps I could have had a submergence sink!

That quivering quaking morass would have been perfect for a dramatic struggling/submergence video!

But, at least I left with a video of me fighting my way, slightly over waist deep, through bottomless mud whose surface really quivers like jelly!

By next spring, it will likely revert to being submerged pond bottom again, and stay that way for I don't know how many years before it becomes exposed again.

But then, with global warming, who knows?

Enjoy the video, and make certain that the "Quality" in "Settings" is set to 720p!

The shoreline in the photo below doesn't look like anything out of the ordinary, but click on it and watch what happens when a 6' 2" man takes a stroll around there, and winds up having to fight his way THROUGH the shoreline to get around (and there is nothing solid beneath his feet)! Quite a workout! 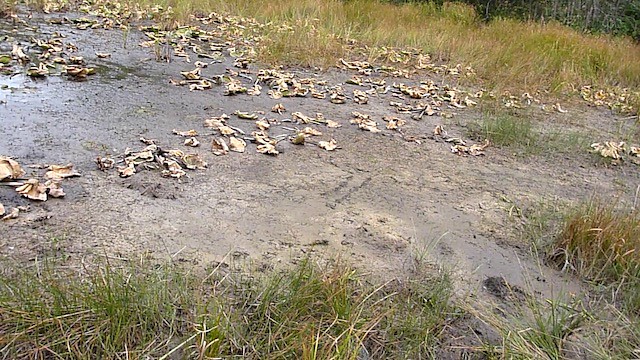 great looking mire,.. is that for us until next year then?
Top

You can see why it is killing me not having been able to shoot any dramatic submergence scenes there!

That "innocent-looking" shoreline really comes alive as soon as I set foot (followed by legs, and more of my body...) in it, and you can tell that it is hungry!

is that for us until next year then?

I am afraid my season is finished for this year.

For starters, hunting season is underway, although I haven't let it stop me before.

But, the persistent heat has vanished after a cold front moved through Tuesday, replaced with much cooler weather, going from around 28˚C/82˚F just recently to 19˚C/66˚F the rest of this week and next weekend for highs in the valley (perhaps it might edge up slightly warmer than that, but not enough), with it turning even cooler next week with rain, and you can subtract around 5˚C/9˚F from the valley temps when you go into the high elevations where my bogs are (northeastern BC may get snow in the higher elevations, although I wouldn't be surprised if it snows high up in the mountains all along the BC/Alberta border).

Then, there is the problem with my neck, which hasn't improved, and I tend to wonder if I should have stopped my bikerides after my third one when the intense pain hit me at the end of my bikeride, since a week after that, my neck showed signs of improvement before my fourth outing, but has gone downhill ever since, and is now sensitive to even regular daily activities (and my prescribed physiotherapy exercises seem to make it worse).

I just hope I can fully recover over the next 9 to 10 months, so I can bring you a new set of videos next summer, and with the addition of more mud to my bog, it should become exposed around half a month earlier than it would if I had done nothing on my last adventure!

Boggy Man, for your next sinkings, can you wear opaque tights please !!

The videos come back soon
Top

Boggy Man, was this video even scripted? As in the lines and stuff
Just an uptuned nose at the surface （｡◕‿◕｡）
Top

hello
Amazingly I have crossed the famous Grimpen mire it is called Fox Tor mire and i was very disappointed its been drained and is now about six foot lower, it was a dream for me to try it out, i did it and just ended up wet to my knees lol.
but thanks for the video my next dream is to visit BC and Canada.
wish best wishes,
Deano
Top

so whats going on with boggy this year? much sinking news?
Top
Post Reply
269 posts

Users browsing this forum: No registered users and 2 guests