It is pxehooq, but all of my videos are either unlisted or private, so there isn't really much to see on that channel.
I sink, therefore I WAM!!!!

, during a sinking season that almost wasn't!

After I had a private sink to enjoy my first bottomless bog encounter of the year, and clean up all the invading weeds, I then shot my first submergence video of the season, which was broken up into the dramatic sink portion, and the subsequent emergence/multiple submersion/final escape part. Due to such a late start to my season, I had been out of practice, and shouldn't have had the stick that the camera was mounted on, stuck where the mat of floating vegetation was thinner, because when I framed the location of the action with the camera, my weight had affected the vegetation mat such that the camera was actually pointing higher than it was once I left the spot. So, the view shifted downward after I started the recording and left the camera, and I also landed short of my intended target spot in the patch of gooey, sloppy, bottomless ooze.

The result is that in these two videos, you get a view of the pulsating, undulating, sloppy quagmire, with me centered in the top of the image.

But, at least I am still in the scene, and the struggle in the heavenly ooze is nicely captured.

However, the rest of my videos, to be posted later on, are more properly centered. Due to problems in the past, I decided to age-restrict the videos, so you have to sign in to YouTube to access them. Hope that isn't an inconvenience. Enjoy!

A man walking through a meadow, appropriately dressed for taking a dip in a nearby lake, stumbles into deadly quicksand, with the usual predictable results! 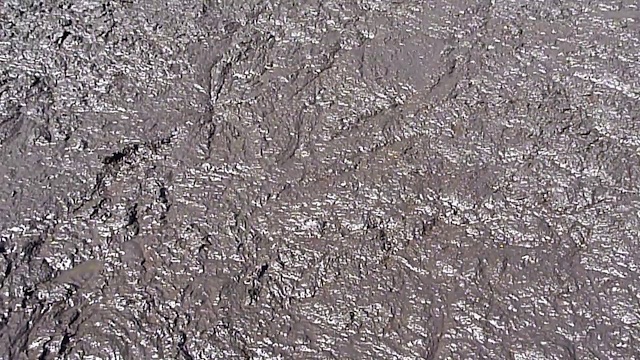 A patch of mud undulates and pulsates. Some gas escapes from the bog. Swamp gas? Nope, it is the escaping breath of its latest meal that it had sucked under, which then manages to break the surface, and after getting sucked under a few more times, finally escapes the sloppy deathtrap! 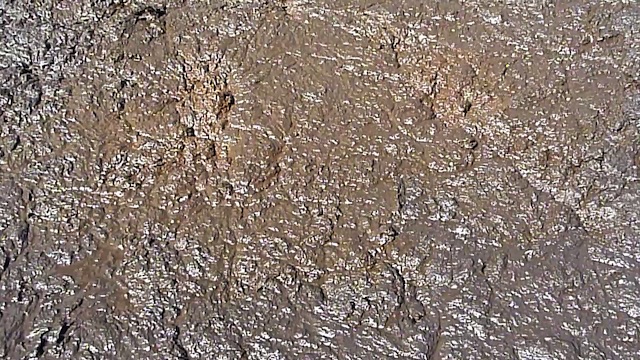 my god that stuff looks good enough to eat,. even though its a little off centre the majority of the action Is visible,. well done,.. the mire just pulsating and wobbling around looks amazing
Top

OMG! Thanks for sharing this! I love your work, and I have missed seeing your great videos.

I feel like Christmas came early this year; I know I just did!

absolutely great stuff. Yeah it was out of center but thats no big deal. it looks awesome.

looking forward to seeing more of your videos.

gamwam wrote:Wow boggy that was great, just my style. U were pretty deep at the end there, it's a shame you never got the hose submergence on video, I think I would have don't exactly the same as u if I had access to a bog, along with a couple of head first dives he he

Thanks for making the forum worth visiting

On Sunday, September 7'th, 2014, I had another adventure, where I finally made another hose submergence video!

For some reason, the picture quality seemed a bit fuzzier, making me wonder if it was poor lighting, or perhaps the camera didn't focus on the scene properly.

Unlike the previous one I did back on Wednesday, August 18'th, 2010 (5'th video down), this time the annoying wind was drowning out a smaller percentage of the audio, so this time, more bubbling can be heard.

I just wish that I had no wind at all to interrupt the wonderful sounds, but fortunately, this rather lengthy sinking/bubbling session has plenty of "swamp" burps and farts to be heard! This video contains the entire session from entrance to exit. Enjoy!

A 6" 2" tall man jumps into a patch of mud, and slowly gets sucked deeper and deeper into the bottomless ooze, until eventually, the heaving, pulsating surface closes over his head!

The hungry gooey morass holds him deep within its smothering grip for a long enough time to suffocate him to death, and then some!

The man now belongs to the greedy quagmire forever!

There is a shop-vac hose handy that the man is able to reach, which is his key to survival in the deadly muck!

He sticks it in his mouth before the choking mire closes over his face!

So, for the duration of the time he is held deep within the sucking muck's death grip, the hose is the only thing keeping him alive, allowing him to survive beneath the batterlike surface of the quivering ooze! All the while, his escaping breath keeps making the gulping, undulating mire bubble, burp and fart continuously, something that would have only lasted a few seconds before he suffocated to death if he hadn't had the hose to breathe through!

Eventually, he manages to fight his way back up to the surface (fortunately he was able to keep himself well within arm's reach of the surface the entire time), and drag himself out of the patch of sticky, heaving, pulsating ground that so badly wanted to be his grave! 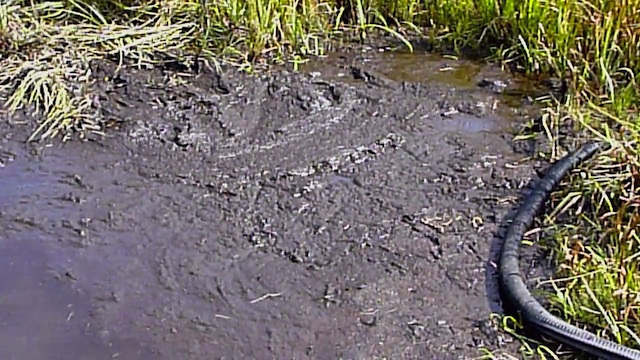 Wow! That was incredible! Thank you for sharing this.

That stuff looked so good; I wanted to jump in there! !
Top

wow I love this video,. It really brings back fond memories as I know exactly what it feels like to do just that,. I used to have so much fun and used to love the moment when I was under the surface and would shove my arms down by my side and with one mighty pull and flex of the knees I would pull myself deep enough so that I couldn't reach the surface with my arms stretched up,.. unfortunately even with a tube you can only do that for a short time as the weight of the muck pressing on the chest kind of inhibits breathing once your that deep,( often wondered about a scuba tank for deeper adventures?)... I also used to love working myself into an almost upside down position which was a much fun to work yourself back up from - I miss those good old days,.. great work bogyman thanks for taking the time and effort to shoot, edit and upload these

On Tuesday, September 16'th, 2014, I had my third and final adventure of my abbreviated 2014 season, where I made a really fun submergence video. That day, I had brainstormed about what to do, and didn't feel like repeating any of the stuff I already did the last two times, instead opting for more variety in this short sinking season. So, I settled on a scenario that I had played over and over in my mind for a long time, and felt that it was time to give it a try, and hoped that it would work. It was a success, although I may have to refine it in the future!

At first, I thought that I wouldn't be able to upload it to YouTube without cutting it into two parts, because even the minimum essentials ran slightly over 15 minutes, and when you exceed that limit, you have to give them your mobile phone number to verify that you are the owner of the account, something that I can't do (I sure wish they would add a verify by email option).

Since I wanted to keep it whole, I thought about uploading it elsewhere.

But then, I discovered that the time limit wasn't 15 minutes, but 15 minutes and 30.00 seconds!!!!! However, if you go a fraction beyond that, then the video is inaccessible until you verify your account. As it turned out, I was just in luck!

I was able to trim some stuff off at the beginning (the title followed by offscreen talking about going for a swim, and a comment about how muddy it was around there), and the end (closing caption "The End?") and was left with a video that was 15 minutes and 28.4 seconds (rounded to 29 seconds)!

It uploaded without any problems, and so, you can watch the entire 15 minute 29 second video unbroken!

In the escape video, at the end, I toss some mud into the center, since it was the lowest spot, where the rainwater tended to accumulate.

I should warn you. If you tend to suffer from mud/qs withdrawal during these short, cold winter days in the Northern Hemisphere, watching these videos might aggravate your symptoms! You have been warned! Enjoy!

You have always been told that if you fall into quicksand, you should lay down on it to spread out your weight and easily float, and then you can make it to safety. But, as one man out for a swim discovers, it does NOT work for THIS bog!

When he stumbles forward into a patch of quivering quagmire, he lands on his front and can't get back up, although he manages to free his feet. He can't pull himself forward at all! Then his arms get stuck in the doughy muck! He continuously tries shifting his weight to his lower body to try and stand up in the mire (and hopefully find a bottom with his feet), but it only causes his lower body to sink down deeper into the bouncy bog, while his upper body remains stuck!

He starts to notice a pattern - each time before the bog sucks him deeper, the pressure of the mud underneath him starts to drop, and then so does he!

But, even though he knows when he is about to be sucked down deeper, there is nothing he can do to stop it, and he also continues to slowly sink the rest of the time as well, with the doughy, elephant-skin-like surface pulsating and heaving around him, slowly engulfing him! There is no way out! He soon discovers that the hungry mire is going to swallow him no matter what position he is in - horizontal OR vertical! 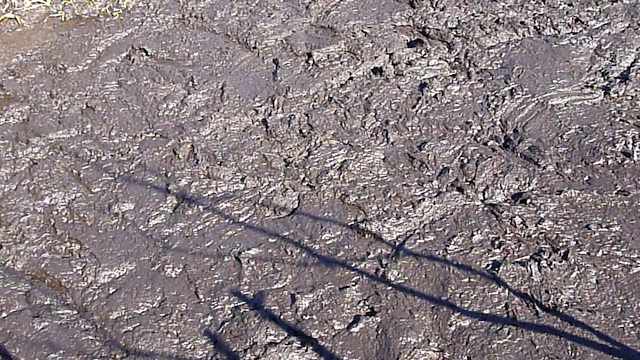 The quilt-like, elephant-skin-like surface of a patch of doughy mud undulates and pulsates as if it is alive. Then, it farts out some bubbles of gas, which turns out to be the escaping breath of a 6' 2" man that has been gulped beneath its surface, standing up, and is now suffocating!

He manages to fight his way back to the surface, and slowly work his way out of the smothering mire, finally pulling himself to solid ground! BTW, those aren't muddy hands on the surface, but globs of mud that dropped from the victim's hands before they disappeared beneath the surface! 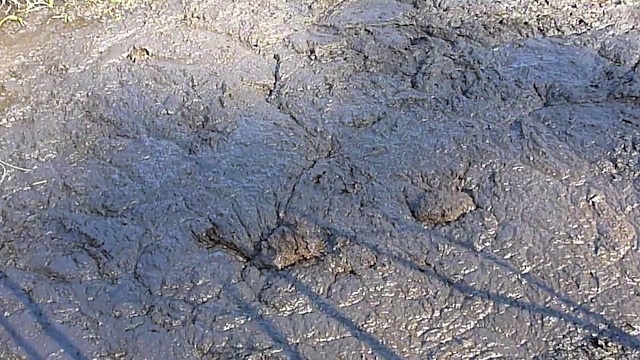 Absolutely INCREDIBLE, Boggy Man! Your best adventure yet. What a playground you have there, I say with envy. Thanks for posting.
Top
Post Reply
262 posts

Users browsing this forum: No registered users and 0 guests